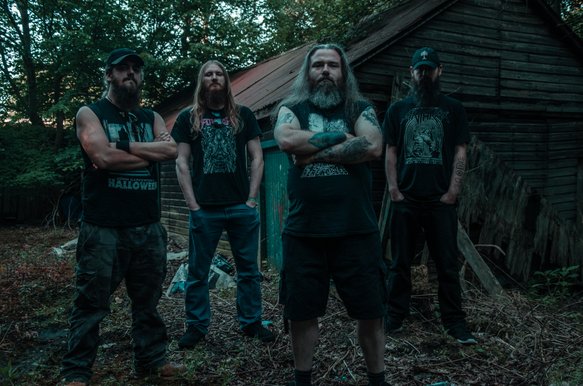 Dog Tired are an Edinburgh based metal band, born in late 2004 from an unhealthy obsession with riffs.

Merging the relentless brutality of early Gojira and Entombed with the riff orientated assault of High on Fire and The Haunted, Dog Tired have created a sound that is heavy, memorable and their own.

With four well received albums under their belt and their highly praised 2021 single 'Feast', Dog Tired have earned themselves an ever-growing fanbase and have relentlessly toured the UK and Europe.

Their commitment to providing an intense and heavy live show has earned them recurring slots at festivals such as Bloodstock, Thrashersaurus, Wildfire, Rabid Fest, Uprising, Red Crust, Bevvy Scotland and Bob Fest. Following the success of the 'Electric Abyss Tour 2019', Dog Tired are now booking shows and festivals in 2022 and plan to record a new album mid-year with a release date of Autumn 2022. The band have secured several UK festival appearances in 2022 and have already been confirmed for Norway's Spetakkel Festivalen with headliners At The Gates.

'Riffs that frankly are what metal is for any generation.' 10/10 Metallum Sub Terra

'so damn heavy, it threatens to bust open some skulls - Dog Tired have released one of the best of the year for sure.' 9/10 Games, brrraaains & a head-banging life

'Inside are nine of some the heaviest, riff-laden songs put out in 2019. This is no-holds-barred, take-no-prisoners heavy metal.' 5/5 SkullsNbones

'Dog Tired have more than enough talent, skill and musicianship to construct songs that epitomise what metal is all about.' Moshville Times